Please note that all photos are the property of the blog owner, and are copy righted. If you'd like to use any of the images, please email me and I'll probably let you have it for free, but no stealing, please. ;) 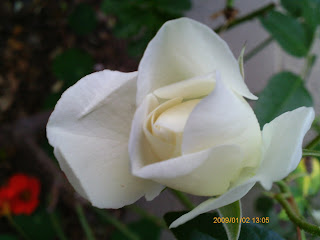 Email ThisBlogThis!Share to TwitterShare to FacebookShare to Pinterest
Labels: rose

The grass withers, the flower fades,
But the word of our God stands forever.
Isaiah 40:8 (NKJV) 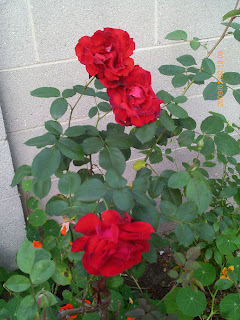 These roses are already going ... they were lovely, with their red velvety petals and deep color.

I am so grateful that my life is not based on the transience of anything in this world, but on God and the enduring promises in His word.
Posted by Tanya at 7:27 AM 2 comments:

Note to Self:  Don't put purse in sink with automatic faucets.

If you saw my FaceBook page last night, you saw that comment.  I followed it with "Cell phone and camera in rice praying for revival."

As I was waiting for my lunch, a man said to me, "Your purse is dripping."  I just thought it was because I'd used the the sink as a shelf and water got on the outside.  A few moments later, I realized I was leaving a trail ... I looked in my purse, and there was about an inch of water in it!  My cell and camera were soaked.  Neither worked.

Naturally, I was bummed.  I had taken my nephew back to Morro Bay, and was looking forward to a relaxed trip home, perhaps stopping here and there to take pictures  (I have some ideas for future blog posts).  But without a cell phone to let my family know I was OK if I got too side-tracked, I had to head for home without further ado.

I stopped at Coffee Bean in Arroyo Grande, and the people there were so nice.  A guy heading out to wash windows opened the door for me as I was leaving the store, the "proper" way.

Out of my mouth popped, "I'd forgotten how nice people are up here."

That led to a conversation about me being on my way back to LA.  It was a nice, real conversation with a stranger, mostly about the Coffee Bean's tours of their offices in Camarillo.  But it was just nice, and totally cheered me up.

I was further cheered this evening when the camera worked.  This is the only picture I managed to take yesterday, but I'm so glad it's there.  Such a reminder of God's love and provision.

(I think my cell phone is going to be OK, too.  It turned on this evening, but the screen is still showing signs of wetness behind it.  Back into the rice it went.)

CORRECTION:  The Coffee Bean is actually located in Pismo Beach, according to the receipt.  It's the one in the outlet center just off the 101.  :)
Posted by Tanya at 6:11 PM 2 comments: 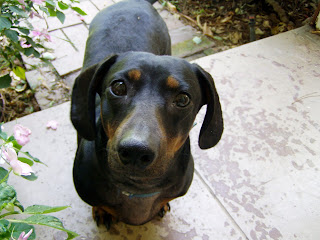 Maya is our little dachshund.  We got her from a former church member who moved and couldn't keep her any more.  We had no idea that dachshunds were such cuddlers and lap dogs. 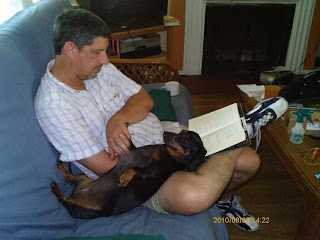 Another funny thing she does is burrow under blankets.  She has one designated blanket on a chair, and when she wants to sleep, she gets under it.  Sometimes I've even seen her sort of "toss" the blanket a bit so that she's covered.

One of her favorite things to do is lie in the sun.  I'm told that many dachshunds love the sun. 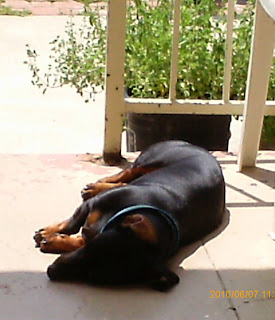 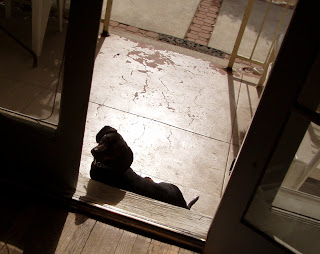 She gave us a bit of a scare Sunday night.  She was wandering around the house after we'd all gone to bed, which was not normal behavior.  And she didn't want to go out.

I picked her up and she was shaking.  Long story short, I ended up praying for her and sleeping in the rocker with her on my lap, covered in the blanket, until I had to get up at 5.


She was still a bit lethargic in the morning, but as the day wore on, she was back to her usual energetic self.

We are grateful for her swift recovery.
Posted by Tanya at 8:47 PM 1 comment:

Email ThisBlogThis!Share to TwitterShare to FacebookShare to Pinterest
Labels: Maya 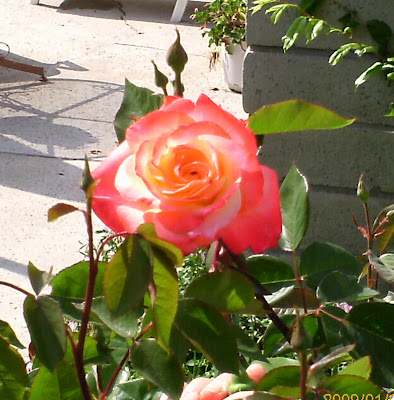 A lovely rose in my friend's garden.  She has a truly green thumb and can make almost anything grow.  Her yard is an inspiration to me. 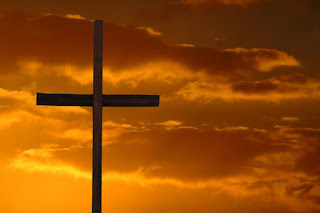 ... but Sunday's coming!  Praise God for His indescribable gift.

This song keeps running through my mind.  It's full of deep theological truth.

For I received from the Lord what I also passed on to you: The Lord Jesus, on the night he was betrayed ... (1 Corinthians 11:23)

Luke 22 gives a detailed account:
They prepared the Passover.  When the hour came, Jesus and his apostles reclined at the table. And he said to them, “I have eagerly desired to eat this Passover with you before I suffer. For I tell you, I will not eat it again until it finds fulfillment in the kingdom of God.”

After taking the cup, he gave thanks and said, “Take this and divide it among you.  For I tell you I will not drink again from the fruit of the vine until the kingdom of God comes.”

And he took bread, gave thanks and broke it, and gave it to them, saying, “This is my body given for you; do this in remembrance of me.”

In the same way, after the supper he took the cup, saying, “This cup is the new covenant in my blood, which is poured out for you. But the hand of him who is going to betray me is with mine on the table.  The Son of Man will go as it has been decreed. But woe to that man who betrays him!”  They began to question among themselves which of them it might be who would do this  (Luke 22:13b-23).

The man who was called Judas, one of the Twelve, was leading them. He approached Jesus to kiss him, but Jesus asked him, “Judas, are you betraying the Son of Man with a kiss?”  (Luke 22:47-48).


Betrayal by kiss, the sign of friendship in their culture.  How many times have I betrayed Christ??  Too many, I am sure.


I am so grateful that those betrayals are, and will continue to be, under the blood of Christ.


In our tradition, we celebrate communion every week, as a reminder of Christ's gift to us.  It truly never grows old.
Posted by Tanya at 2:41 PM 1 comment:

The sidewalks on our street were marked for replacement a few weeks ago due to tree root lifting damage.  These are the sidewalks on either side of our house.  Our sidewalk is mostly fine (the white metal fence is ours). 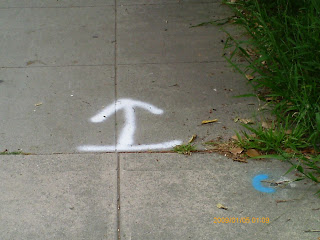 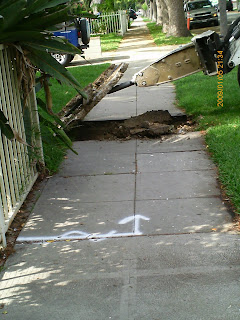 The heavy equipment arrived yesterday to remove the existing sidewalk pieces.  It was really fun to watch.  These little bob-cats lift the pieces and somehow get them in the street and then hammer them into smaller pieces.  The smaller pieces were placed into huge dump trucks by the other cute little bob-cats. 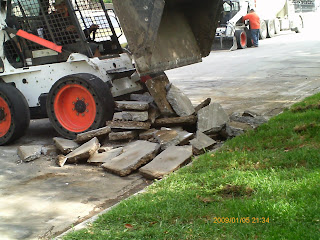 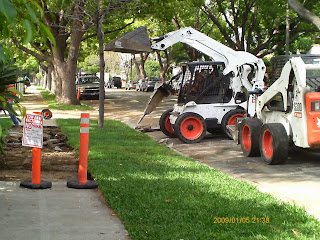 This morning, the concrete was poured and curing by the time I got home from breakfast. 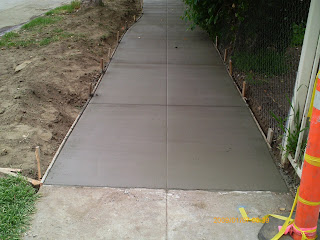 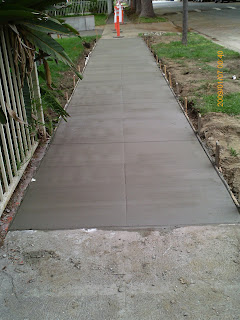 The company doing the work for the city promised that they would get it done quickly, and to be honest, I was pretty skeptical, but they have come through so far.  Next is fixing the landscaping and any sprinkler systems damaged.   And I imagine they'll do the other side of  the street next week. 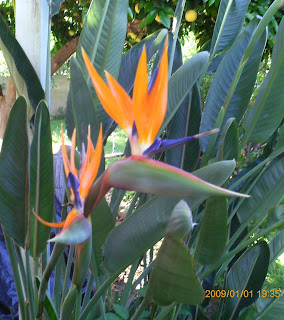 Love 'em or hate 'em, most people have an opinion on them.  Some find them lovely and exotic.  Others think they're creepy.

Personally, I think they're exotic, and pretty.  But I find them a royal pain as a part of the landscaping.  They're somewhat aggressive reproducers, and difficult to keep in check. 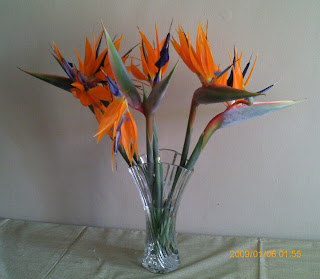 They do make stunning cut flowers, and last a long time in a vase.  My daughter cut these yesterday, and they'll be around for about a week.
Posted by Tanya at 2:39 PM 2 comments:

Email ThisBlogThis!Share to TwitterShare to FacebookShare to Pinterest
Labels: flower

A weird thing happened to me this morning on the freeway.

I was on a transition road, and a car was following pretty closely behind me.  The brake lights were suddenly lit on the cars in front of me.  Naturally, I braked.  Nothing spectacular, just normal LA freeway traffic.

Then the car that was following too closely (and I don't judge him for that, it's easy to do here) pulled to the right of me to pass, and as I glanced over, he was holding his cell phone up like he was taking a picture or video of my vehicle. 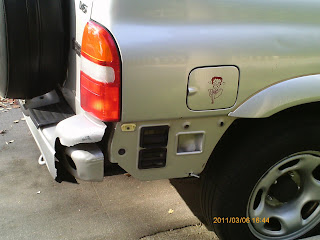 I felt a little uneasy, wondering why.  Who knows?  Maybe he was just admiring my broken bumper on the right side, or the Betty Boop sticker that hasn't yet been removed ...

Regardless, it left me unsettled.  Cell phone cameras are ubiquitous, and although a very good thing in most cases, they can probably be used for nefarious purposes, too.  Most of the time, I try not entertain conspiracy thoughts, I read them enough in fiction to satisfy anyone, but it's still nagging at me.
Posted by Tanya at 1:14 PM 3 comments:

El Camino Real, or the King's Highway (it's Spanish for the royal road):  It runs north and south along the Pacific Ocean from San Diego to Sonoma.  I traveled the LA to Morro Bay portion today, both ways.

It was a lovely day, and the King of Kings smiled on us.  The hills are still green from all the rain; some looked like velvet, with fuzzy trim.  The trees had new growth.  The yellow wild mustard provided a lovely counterpoint.  Orange California poppies lined the median, with sweet little purple flowers adding contrast.  The ice plant was lovely with its purple, pink and light yellow flowers.  Over all was the bright blue sky with a few wispy clouds.  All in all, it was a green, gold and blue painting with a few shots of orange, purple, pink and white to add interest.

We hit the winds at Gaviota, and the grass on the hills was undulating with all the strong gusts.  The grass truly looked like green waves. 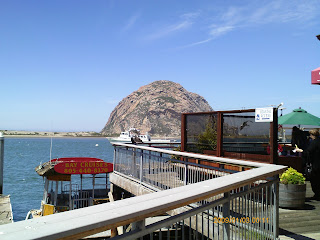 Although a bit breezy, Morro Bay was sunny, and we got fish and chips from Giovanni's and played at the Rock for bit.  And if you are unfamiliar with Morro Bay, it is usually chilly and cloudy.

The kids fed the seagulls and ground squirrels. 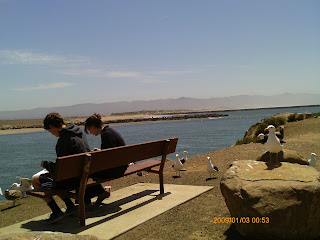 It may sound trite, but as the day wore on, I felt God really was smiling on me, drawing my attention to one new vista after another, as we traveled His road, the King's Highway.
Posted by Tanya at 8:50 PM 3 comments:

Apple blossoms from earlier this "spring".  They smell wonderful, too. 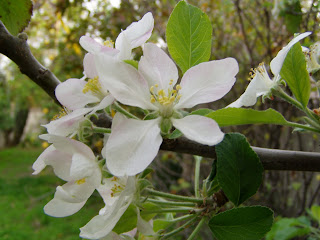 Taken this morning:  fruit is set, and even a few with some color. 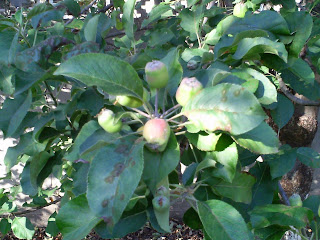 To keep this in perspective, they are still walnut sized, just perfect little apples.  (and if you know what disease is attacking the leaves, let me know.  I'll be taking a sample to the nursery soon.)

Here in California, apples blossom in the late winter.  The fruits were set pretty much mid-March, and we will start harvesting in June.  They are mostly gone mid-July, although there are still a few into August.

I think it's really cool that they start out being perfectly shaped apples, they just need to mature into their full potential: an illustration of all life.
Posted by Tanya at 8:39 AM 7 comments: 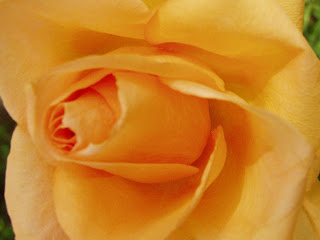 I love the color of this rose, taken last spring at the Rose Garden at Lacey Park in San Marino, CA.
Posted by Tanya at 5:44 PM 3 comments:

New Amaryllis for this Year 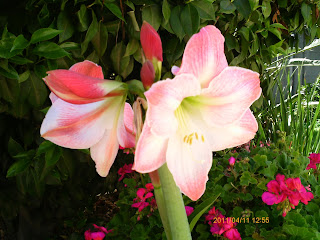 This year's amaryllis, it just bloomed a few days ago.

I love amaryllis, especially this color.

I don't know if you can see it, but there's a second stem behind this main one, with another bud.  YAY!  I should have flowers for a few weeks.
Posted by Tanya at 5:55 PM 4 comments: 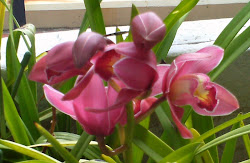 Tanya
Seeking God as a wife and mom.